The RCMP has charged Peter Kiewit Sons ULC, a large American based corporation., with criminal negligence causing death. These charges relate to a 24 year old employee who died at work on February 22, 2009.

Also charged were two managers.  I have previously written about the Westray provisions in the Criminal Code, under which supervisors who fail to direct work safely may be criminally charged.

It is alleged that Kiewit and the supervisors failed to take reasonable steps to prevent bodily harm to the young worker, Mr. Sam Fitzpatrick, contrary to section 220(b) of the Criminal Code.

The incident happened while Kiewit, a large construction company, was preparing a rock slope site to install a run-of-river hydroelectric project.  Workers were drilling, blasting and scaling the rock slope.  The angle of the mountain slope was being increased so that a large pipe could be installed to transport water to a hydroelectric station.

Just the day before, on February 21, 2009, Kiewit had suspended its construction operations on the worksite due to a “near miss” incident.

An internal investigation of that incident indicated that an excavator dislodged a rock. The rock traveled down the rock slope, and struck a hoe drill located on the lower portion of the worksite, causing damage to the hoe drill. The internal investigation report indicated that the root cause of the rock fall was the excavator, which was working above the area of the hoe drill, and its associated crew.

A new work plan was made. From then on, only one bench would be worked at a time. 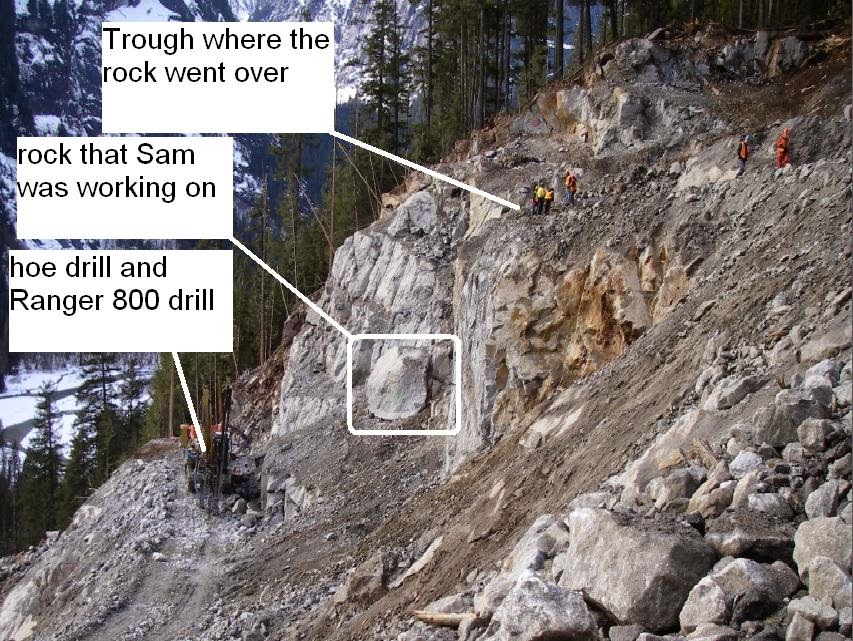 Section 20.97 of the B.C. Occupational Health and Safety Regulation (the OH&S Regulation) states “Rock scaling and like work must be undertaken from the top down, and any area into which material will fall must be kept clear of workers and equipment.”

The next day, February 22, 2009, when worksite operations resumed, despite the new work plan, Mr. Fitzpatrick and others were ordered to drill rock in an area in which at least one excavator was directed to work above them.  Tragically, Mr. Fitzpatrick was struck by a large boulder that had rolled down the rock slope into the area in which he was working.  One or more excavators were working above him, clearing loose rock.

Heartbreakingly, his younger brother was working nearby and watched it happen.

The WCB concluded that these violations created a high risk of serious injury or death to several workers and that Kiewit was “reckless” and “grossly negligent.”  Kiewit was originally fined $250,000.

Despite this, upon appeal, the Workers’ Compensation Appeal Tribunal (WCAT) reduced the fine to $100,000. This part of the case alone is a whole other story. To a corporation of this size, this may be a minor cost of doing business.

This is one of the largest organizations yet to be charged under the Criminal Code for a workplace fatality.

Some businesses still consider worksite safety as a barrier to their operational goals, rather than an important goal of it’s own.  This attitude has the potential to result in imprisonment for key players.

Maybe one day, our children will live in a country in which prompt charges of this nature are the rule, rather than the exception.

This is a modified version of an article that is appearing in the Kelowna Daily Courier on May 31, 2019, the Kelowna Capital News and other online publications on June 1, 2019 and June 2, 2019. The content of this article is intended to provide very general thoughts and general information, not to provide legal advice. Advice from an experienced legal professional should be sought about your specific circumstances.  If you would like to reach us, we may be reached at 250-764-7710 or info@inspirelaw.ca.